Shichigoro Shingo is an art project composed of Shichigoro Shingo, the illustrator, and Shichigoro CHR, the designer. After a classical training in oil painting in Tokyo (Japan), Shichigoro Shingo started using digital mediums such as Photoshop in order to create artwork. At first it wasn’t a choice, but more an obligation because art supplies were expensive. What was first a constraint became his strength as he perfectly appropriate this technique.

He developed his own personal style around topics such as: organic machines, strange little creatures, robots, in a world which seems at war. What is amazing is how he succeed into putting together thing that can be opposite: children warriors, weapon girls, cute dark creatures, etc. Those antagonist topics create an atmosphere both peaceful and dramatic.

We can feel the influence of Japanese animation movie through his cute and weird creatures. They are kind of reassuring. H. R. Giger and the whole Alien universe is also not far away, especially regarding the organic machines. 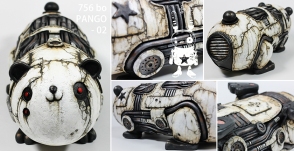