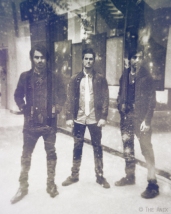 The Anix is an American band from Los Angeles, California, which was founded in 2001. It is composed of 3 members: Brandon Smith (vocals, guitar and synth), Logan Smith (drums) and Chris Dinger (guitar).

The Anix is one of those bands that we enjoy listening regardless where we are or in what mood we are. Their mix of Electro/New-Wave is well balanced and the rhythms are in most of their tracks sustained. It helps to create a dynamic all along their albums and to convey a feeling of movement.

The Anix has released 4 albums: An Illusion of Time (2004), Demolition City (2008) and Sleepwalker (2011). Sleepwalker is certainly their most successfully completed album, with a particular note for their cover of Cry Little Sister from Sisters of Mercy.