David Altmejd is a Quebecer artist who creates both sculptures and art installations. He was born in 1974 in Montreal and is currently living and working in New York (US). His preferred materials are mirrors, Plexiglas, epoxy, feather, polystyrene, jewels, resin, which he combined to create unique piece of art.

The work of David Altmejd is centered on the concept of energy. He likes to assemble objects charges of different types of energies, which together will create a dynamic and even in some case a tension inside the object itself. For instance he mixes themes such as death, life, dream, nightmares, etc. It is what we found in the werewolf head which symbolise the transformation. David Altmejd considers it as an important source of energy.

Not far from this concept we also find the topic of flow and renewal. Within sculptures he tends to create a cycle. It’s what we can see on one of his major piece called The Flux and the Puddle. Contrary to most of his sculpture, this one have to be read horizontally and not vertically. It is a massive Plexiglas box in which we can found a multitude of details and scenes. Some are visible some other aren’t. He have been constructing this sculpture from the inside and it takes him six months to finish it. This piece is considered by David Altmejd himself as a summing-up of his entire sculptural practice. 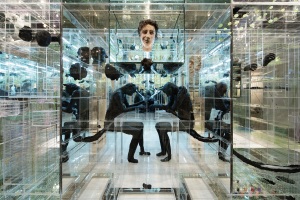 His first public work in located in Montreal and is called The Eye. It is exposed in front of the fine art museum. It is a symbolic representation of the opposition between the outside and the inside of the museum.

David Altmejd work is recognized all over the world. The first retrospective of his art have been organised and presented this year in Paris, Luxembourg and Montreal.