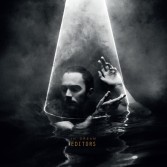 A little more than two years after The Weight of Your Love (2013), which was a bit disappointing, the British band Editors offer us their fifth album: In Dream. It is their first self-produced album and the result is great. It is the perfect balance between what make the essence of Editors and the right amount of experimentation.

All along the album and especially during the introduction track No Harm, the deep voice of Tom Smith is very well highlighted. Ocean of Night is one of the best song of this new release. It is both powerful and fragile and can be listen in a loop. Forgiveness has also the same heady rhythm. Salvation is accompanied by a background of violins, which convey to this track a dramatic atmosphere.  Life is a Fear is based on a good catchy eletro rhythm, just as Our Love. The Law featuring Rachel Goswel (former vocalist and guitarist of the shoegaze band Slowdive) is slow and dark. All The Kings like a traditional Editors song. At All Cost is like a prayer and will slowly caress your ears. And finally Marching Orders close the album, with a confident and satisfying song.

Editors is a band with a lot of potential and it is a pleasure to see them succeed in exploiting their talent. With In Dream they opened other paths and their music takes another shape. The risk of self-producing their new album was completely worth it!

Goth Me Out Community