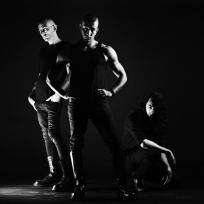 Der Noir is a Cold wave/Darwave Italian band created in 2011. It is composed of 3 members:  Manuele Frau (vocals and bass), Manuel Mazzenga (guitar) and Luciano Lamanna (drum and synths).

The music of Der Noir has a neat aesthetic. Every emotion seems to be measured accurately to create a result perfectly controlled. They pay a lot of attention to both vocals and guitar. They also use vintage equipment which gives to their music an 80’s sound.

By gathering all those elements they create a deep, dark and kind of depressive atmosphere. Another feeling that you will maybe have when listening to their music will be a sensation of mild torpor that will surround you.

Der Noir released 3 albums: A Dead Summer (2012), Numeri E Figure (2013) and A Certain Idea of Love (2015). Their last release was an instrumental album, but it was not completely a surprise. Indeed, when you listen to their whole discography you quickly realize that even if the vocals bring a lot to the songs, they could also totally work without it. It emphasizes once more the quality of the music of Der Noir.

Goth Me Out Community